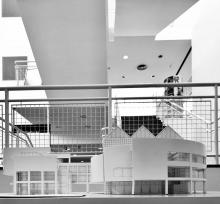 The Stadthaus was designed by world-renowned and award-winning (e.g. the Pritzker Architecture Award in 1984) US-American architect Richard Meier.

The Stadthaus is often called the 'little sister' of the famous Getty Center in Los Angeles, which was also designed by Richard Meier and opened its doors to the public in 1997.

In the guided tours, you will learn a lot about the unusual architecture, the special way in which Richard Meier reacts to the surroundings and much more.

What makes this tour special is the view of the 'behind-the-scenes' work that goes on at the Stadthaus. The tour ends on the Stadthaus terraces, where you can enjoy the spectacular views of the minster and the minster square as well as a glass of Strawberry Punch or Glühwein (depending on the season).  And you can ask everything you always wanted to know about the Stadthaus.

Strawberry punch on the Stadthaus terrace

The Stadthaus is now 25 years old. Countless personalities have visited the building, Federal Presidents and Federal Chancellors as well as world renowned artists and 'underdogs'. Stadthaus director Karla Nieraad has met most of them and has a few stories to tell. Which is why the guided tours with Karla Nieraad have become the most popular tours of the building. Her tours of the Meier building focus on the US-American architect's spectacular vantage points and architecture. This alone is very exciting, as you get to know how extensively Meier analysed the immediate surroundings and the Ulm minster when he developed his designs.

You can book Stadthaus tours by contacting Sabine Schwarz, either by calling her on 0731 / 161 7700 or by sending an email.