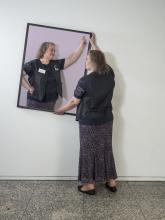 Astrid Businger used to be a chemical laboratory worker before she had her kids, including twins. After taking a break in 2001 to be with her family, Astrid Businger joined our team and is now one of the longest employed staff members, together with Natalia Gerasimenko.

She keeps her calm even on the busiest of days, which may be a result of having three almost grown-up daughters. 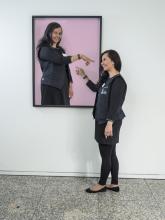 Derya Eren is our youngest team member. She has Turkish roots and grew up just across the Danube in Bavaria. Before training as a fashion salesperson, she worked in a doctor’s office. After having her daughter Irem, she worked as a part-time cleaner at Museum Ulm, but she was striving for a full-time position. She says that the Stadthaus was a turning point in her life. Derya Eren now greets visitors with her trademark smile, sells catalogues and offers insights into the current exhibitions as if she had never done anything else in her life. Her daughter Irem and her family are the centre of her life, with grandmothers and aunts fully supporting the single mother. 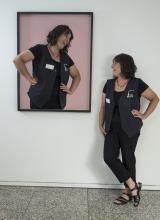 Magdalena Flint comes from up north, and you can tell by her dialect. However, she doesn’t fit the stereotype of a typical ‘cool northerner’. Which is not surprising, giving her Spanish heritage on her mother’s side; she even speaks Spanish fluently. Her father however had taken off towards the West from Dresden, and Magdalena Flint is an avid traveller herself. Her career also took her places, not least because of the recession and better opportunities for child-care elsewhere.

Finally settling in the south with her husband and son Jörn Michel, she joined the Stadthaus team. There was a time when she could be seen at the local recycling centre on certain days – she is a trained in public utilities and waste management after all – where she held a second job. While she managed the contrast between art and the excess of our affluent society in her unique, resolute and pragmatic way (‘Is that art or can we throw that out?’), she finally decided to come over to the art side full time. Something we are very happy about. 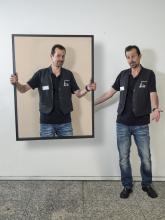 Stefan Hörr is a gardener by trade and has the proverbial green thumb. Be it plants that are part of a show, like in the Berblinger exhibition, or the wild foliage on the Stadthaus terraces.

Son to a German mother and a Portuguese father, he is one of our wildcards when it comes to international visitors, since he is fluent in German, Portuguese and Turkish.

Poetry is one of Stefan Hörr’s passions and he has been writing since he was 12 years old. 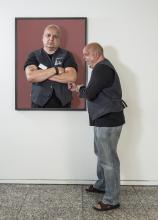 Uwe Kristall’s career as a trained cook, at the military and finally in a ball bearing manufacturing plant, abruptly ended when he developed back problems, leaving him unemployed until he joined our team in 2008. And we can’t imagine what it would be like without him. Not only did he invent the children’s book-corner on level three and organised its inventory, he also became an expert in the Stadthaus architecture and will gladly take visitors on a tour, answering all questions about our life with and in the Stadthaus.

In June 1994, Natalia Gerasimenko took a leap of faith that would change her life forever: She took her eight-year-old son and her family, left Kiev/Ukraine and moved to Ulm, partly due to the danger still posed by the nearby nuclear reactor site in Chernobyl. In Germany, the trained building engineer took a six-month language course and joined our team in 1995. She is the longest-serving member of our staff and took turns with her colleague Hermann Punzet in organising staffing schedules and covered many administrative tasks in our office. Her son is all grown up now and she could enjoy life as a retiree, but she enjoys supporting our exhibition staff for a couple of hours for the time being.

You can book Natalia Gerasimenko for Stadthaus-tours in Russian and Ukrainian: 0731 161 7700.