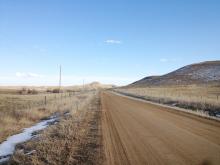 The Road to Ulm

Laurie Schwartz and the ghost town Ulm, Wyoming
America, ca. 1900. Technological progress sets foot on the virgin soil of Clear Creek Valley, railroad tracks are being laid. In the vast west, a little town called Ulm suddenly appears, seemingly out of thin air. It was the boom era of Sheridan County; people came in droves only to leave again – and they are still gone today. 2.500 inhabitants remained, four per square kilometre. Today, only the wind lives in the small city, the human inhabitants all gone since the sixties. Laurie Schwartz knew of Ulm, the one in Swabia, where she participated in the Festival neue Musik at the Stadthaus in 2018.
weitere Infos 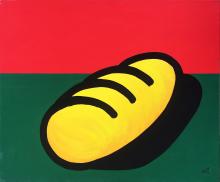 He became known as the ‘bread painter’. But Thomas Kahl, who died much too young in 2017, was so much more than that. The exhibition we opened in early March 2020 in cooperation with Galerie Tobias Schrade made that very obvious. After just one week however, corona forced us to close it down again. Project manager Raimund Kast took to Facebook to present many of Kahl’s works, but a virtual tour can not adequately replace the real-life encounter with art. Which is why the Stadthaus has rearranged its exhibition schedule for the fall of 2020 and will present the show again from autum 2020 - planed 1 December - until the beginning of 2021. weitere Infos 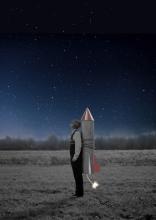 Taking Flight to a World Beyond

The exhibition celebrating the 250th birthday of Albrecht Ludwig Berblinger presents a plethora of ideas along the thin line between science and imagination. It touches upon taking flight in a shoe as well as teleportation. It also proves that the first human to drill a hole straight down from the minster square will come back out in the Flowerpot Bay of Pitt Island. This tunnel will be 12,742 kilometres and flying from one end to the other will take 38 minutes.

Numerous artist and scientist from all around the world have made their contribution to this exhibition. 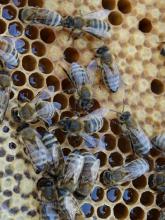 Bees on a honeycomb
Photo: SP/Stadthaus

Finally – it is that time of the year! Our bees have returned to the Stadthaus – for the seventh time! This year they have moved into a new property that has been designed to tie in with the exhibition ‘Taking Flight to a World Beyond’.

Taking flight from their summer residence on the Kabinett terrace (level 2), our 200.000 colleagues will spread out to collect pollen and nectar from the trees and ornamental plants in public parks and private gardens or balconies in and around the centres of Ulm and Neu-Ulm. Their area of activity has a diameter of six kilometres. The city is a great dwelling place for our Stadthaus bees, in contrast to more rural areas which are often characterised by monocropping. weitere Infos 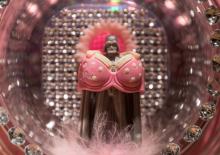 Our life – sweet and Sauer

exhibition is closed aimed at stemming the spread of coronavirus
Heike Sauer was born as the daughter of her parents and grew up in the vast expanse of Swabia. After receiving the university-entrance diploma, Sauer enrolled in the Iwanson International School of Contemporary Dance in Munich to become a dancer and dance pedagogue. When a busted knee ruined her career, she abandoned the silent years of dancing and started talking, dressed in pink and called herself Marlies Blume. And she talked the way she learned it, in Swabian. This has been going on for 20 years now. She collected numerous awards with Ariane Müller, performed with Martin Wangler (aka Fidelius Waldvogel) and last but not least with Hanna Münch as 'Münch & Sauer'. weitere Infos 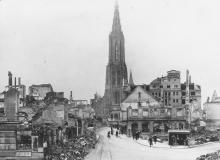 In commemoration of the destruction of Ulm's historic centre

Animated presentation of historic photographs
This year marks the 75th anniversary of the bombing of Ulm on 17 December 1944.

On the third Advent Sunday between 7.23 and 7.50 p.m., a three-waved air strike of British Bombers destroyed most of the historic centre, killing 700 men, women and children.
weitere Infos

The stadthaus takes a curious look at various forms of female headgear in Islam, Christianity and Judaism. All three religions - each in its own way - share their idea of female modesty, that correlates with covering physical charms. The exhibition consists of three corresponding parts: Cherchez la femme, a takeover from the Jewish Museum Berlin, In My View, a stadthaus project with class 10a and the Foto-AG of the Hans und Sophie Scholl-Gymnasium, as well as En attendant l'Eternité, a photo series by Laurence von der Weid. weitere Infos 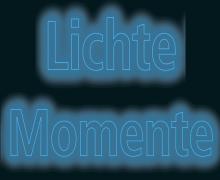 Photography, light objects and installations on the topic of light
Richard Meier's buildings are characterised by the interplay of the outside and the inside, the rooms flooded with natural light. It seems to be appropriate to feature light itself in an exhibition celebrating the Stadthaus' 25th anniversary. We are happy to be able to present works by artists of international renown, works that present light as an event that be experienced sensuously. The two-part exhibition will feature photographs and light objects as well as regular dance and sound performances! weitere Infos 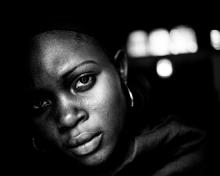 Survivors of Boko Haram Tell Their Story
The Abduction of 276 young girls from Chibok in northwest Nigeria by the militant Islamist sect Boko Haram sparked global outrage in 2014. The campaign #BringBackOurGirls was started. Still the Boko Haram story continues to unfold; thousands of girls are estimated to be in captivity to this day. weitere Infos

Images of people in motion and of emotional people
Nine photographers and one non-photographer, all of which have a special connection to the Stadthaus, to Ulm, Neu-Ulm and the surrounding regions, were invited to create works on the topic of 'movement'. Artistic freedom was guaranteed. An exciting process for all involved. weitere Infos

Photographs from Europe and Asia
The constructed urban environment never was a biotope exclusively for humans. Synanthropes have been around us since the beginning. Meanwhile, mostly safe from hunters, wild boars are ploughing through gardens, foxes burrow under sandpits and deer are occupying the streets. Wildlife can also be spotted in the city of Ulm – just think of the beavers in the parks of Friedrichsau! weitere Infos

In the Exhibition
Foto: SP/Stadthaus Ulm

Hidden underneath the Minster Square
The Minster Square is the perceived centre of Ulm. It's where people left behind traces of their respective civilisations. These traces, which that are more than four millennia old, are much older than the Minster itself. Archaeologists found them when they studied the excavation pit and the Minster Square prior to the construction of the Stadthaus from 1986 to 1993.
What they found includes human and animal bones, tools, everyday objects, and toys. These objects, pulled from the rubble of the Stadthaus excavation pit, cover all aspects of city life. weitere Infos