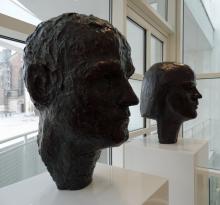 Bronze busts of Hans and Sophie Scholl, created by Otl Aicher
Foto: SP/Stadthaus
If you ascend the stairs to the first floor at the Stadthaus, you encounter two bronze busts: the effigies of Hans and Sophie Scholl. The siblings were partisans of the resistance group "Die Weiße Rose" (the white rose), who were sentenced to death and executed at the prison in Munich-Stadelheim on 22 February 1943.
The busts were designed by Otl Aicher, Hans and Sophie Scholl's brother in law, married to their sister Inge, who later became the founder and long-term director of Volkshochschule Ulm (founded 1946). Her husband, world renowned designer Otl Aicher, founded the Ulm School of Design (HfG) in 1953.

In the 1930s, Otl Aicher had attended school with Werner Scholl, one of Hans' and Sophie's brothers, thus befriending the family. Aicher was critical of National Socialism, but while he persistently refused to join the Hitler Youth, he didn't get involved in the resistance like the Scholl siblings.  Inge Scholl and Otl Aicher got married in 1952.

In March 1991, the city of Ulm approached  Inge Aicher-Scholl and Otl Aicher, to develop a memorial site on the occasion of the 50th anniversary of the Scholl siblings on 22 February 1993.

In June 1991, the committee on art and culture approved the mayor's suggestion to install a memorial at the site of the siblings' former home at the Minster Square as well as inside the Stadthaus, commemorating the lives and actions of Hans and Sophie Scholl.

Otl Aicher developed his ideas in conversation with the mayor Ernst Ludwig and Inge Aicher-Scholl. The memorial at the Minster Square was to be accompanied by two bronze busts inside the Stadthaus. Aicher already had a clay bust of Hans Scholl, which he had made in 1941. He reworked it for the subsequent casting in bronze. He had also made a number of studies of Sophie Scholl while she was still alive, which he used to create her effigy. After the two busts were completed, Aicher had his photo taken with them on 26 August 1991, just before they were shipped to Gauss company in Straubing for casting. Later that day, Aicher had a sever accident while mowing the lawn, succumbing to his injuries on 1 September 1991. Inge Aicher-Scholl then completed the project. The bronze effigies were completed in the spring of 1992 and bought by the city of Ulm.

Almost anytime the two busts at the Stadthaus remind its visitors of the Scholl siblings, their resistance against the national socialists' unjust regime and the values they both fought and died for.